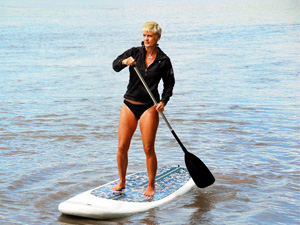 The following is reproduced with permission; by Frederic Lumiere, Filmmaker / January 31, 2016.

Every two minutes, a woman dies of cervical cancer.

With only a few weeks left to live, Michele Baldwin had a dream. She wanted the world to know that other women didn’t have to die from the disease that was about to take her life: cervical cancer. Cervical cancer is almost completely preventable but it kills more than 260,000 women worldwide.

Virtually all cases of cervical cancer are caused by the most prevalent sexually transmitted infection in humans, the human papillomavirus (HPV). According to the Centers for Disease Control and Prevention (CDC):

The American Congress of Obstetricians and Gynecologists (ACOG) recommends that women younger than 21 do not get pap smears or HPV screenings. So how can sexually active woman under 21 be protected? The answer is the HPV vaccine.

The HPV vaccine is recommended for preteen boys and girls at age 11 and 12 to protect them when they have the best antibody response for when they will be sexually active as adults. Just like the Hepatitis B vaccine, another sexually transmitted infection, it is given to kids.

So the HPV vaccine is a cancer vaccine, but how safe is it?