On July 9, Governor Mike DeWine announced that new public health data has led the Ohio Department of Health to designate 12 counties as being in a Red Alert Level 3 Public Emergency as defined by the Ohio Public Health Advisory System. 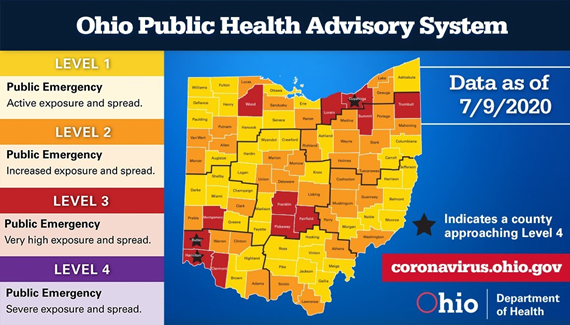 The three Red Alert Level 3 counties marked above with a star (*) are on Ohio’s Watch List as they are approaching Purple Alert Level 4. Franklin County was removed from the Watch List due to a decrease in hospital admissions.

Mask mandates for the new counties upgraded to Red Alert Level 3 were mandated to begin wearing masks in public beginning at 6 p.m. on July 10. Residents in Huron County are no longer required to wear a mask in public, however, they are strongly encouraged to do so.

Gov. DeWine announced the creation of the Ohio Public Health Advisory System to provide local health departments, community leaders, and the public with data and information on the severity of the COVID-19 spread in the counties in which they live. The system consists of four levels with specific risk-level guidelines. Each level is calculated with data gathered on seven public health indicators.