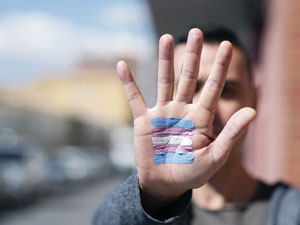 Reprinted from the spring 2020 Issue of The Ohio Family Physician.

Disparities in health and health care for the lesbian, gay, bisexual, and transgender (LGBT) population have been identified and targeted for elimination by the 2011 National Academy of Medicine report1 and the Healthy People 2020 initiative.2 Largely through these efforts, the prevalence of transgender people who seek medical treatment has dramatically increased in recent years.3 Unfortunately, the United States transgender population continues to experience significant bias and discrimination in the provision of health care. Many transgender persons avoid or delay medical care, despite having similar health needs to the general population. Research indicates that trans persons have apprehensions regarding seeking care due to stigma, as well as a lack of access to physicians and other health care professionals sufficiently knowledgeable on transgender-specific needs.4

The true prevalence of transgender persons in the U.S. is unknown, however a recent review estimates that approximately 150,000 youth and 1.4 million adults identify as transgender.5 Other studies place the number closer to approximately 0.6% of the U.S. population, or approximately 2 million persons.6 Based on data from the 2015 U.S. Transgender Survey (USTS) in which 941 of 27,715 respondents were from Ohio 7, the estimated transgender population within the state is between 40,000 and 70,000 persons.

As a particularly vulnerable medical group, transgender individuals have a higher prevalence of mental health problems (depression: 41%, anxiety: 33.2%), are more likely to attempt suicide (41%), smoke (30%), misuse alcohol and drugs (26%), and be infected with HIV (20% in transgender women) than their cisgender (i.e., not transgender) counterparts.8 Mortality among transgender persons is significantly higher than the general population.9 Suicide, HIV/AIDS, liver failure, and cardiovascular disease directly impact this heightened mortality risk.9 Poorer health outcomes are partially caused and further compounded by socioeconomic inequities, including higher rates of unemployment, poverty, legal discrimination, and harassment when compared with cisgender people.10

Meyer’s Minority Stress Model, originally established as a basis to explain prejudice, social stress, and mental health among LGBT groups, has been used to understand disparities among transgender populations.11 In essence, transgender persons’ departure from gender norms establish an “otherness” that is a basis for stigmatization and discrimination.1 Identity-based bias (distal stress) and negative internalized evaluation of these prejudiced experiences (proximal stress) converge to contribute to poor mental and physical health.11 Distal stressors are psychologically distressing events, e.g., actual experiences of rejection, discrimination, victimization, or violence.12,13,14 Proximal stressors include perceived rejection, expectations of being stereotyped or discriminated against, and hiding minority status for fear of harm.14 Individuals who experience higher rates of minority stress report more total physical health problems, and poorer overall health than those who experience less minority stress.15

Data from the 2015 USTS highlight the extent of external stressors. Of Ohio respondents, 32% reported having at least one negative experience with a health care professional related to being transgender.16 This included having been refused treatment, being verbally harassed, or physically or sexually assaulted. Twenty-six percent (26%) of respondents did not see a doctor when they needed to because of fear of being mistreated as a transgender person.16 Fifteen percent (15%) of respondents reported that a professional, such as a psychologist or therapist, tried to stop them from being transgender.16

Unfortunately, a majority of Americans believe that a person’s gender identity cannot differ from the sex they were assigned at birth, effectively precluding the gender self-determination of transgender people.18 Accordingly, the unique health needs of transgender individuals are often disregarded by the medical community and prejudice remains commonplace, impairing transgender individuals’ ability to receive competent care.19 Health care is considered transgender-affirming when it respectfully supports transgender patients’ own self-identified gender identity. Efforts to reduce health disparities for transgender individuals should be comprehensive and must include a focus on the reduction of minority stress. This can be best accomplished by assisting physicians and other health care professionals to both gain knowledge about the transgender population and their healthcare needs, and in providing respectful and responsive care to this group of patients.20