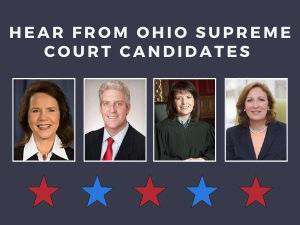 In Ohio, the only statewide races on the ballot in the general election on Tuesday, November 3, are the two Ohio Supreme Court races.

Joining will be incumbent Justice Sharon L. Kennedy who faces Cuyahoga County Common Pleas Judge John P. O’Donnell; and incumbent Justice Judith L. French who faces 10th District Court of Appeals Judge Jennifer Brunner. Republicans currently control the Ohio Supreme Court 5-2, with two of the Republican incumbents up for election. Political control of the Court hangs in the balance as the Court could swing to Democrat control if the Democrat challengers win.

With so much focus on the presidential election this November, the down ticket races often go unnoticed even though the outcome of these races can have a significant impact on the lives of physicians and their patients. The Supreme Court has final say on the interpretation of legislation (including tort reform), election law disputes, and reapportionment. With the Ohio Supreme Court hearing any legal challenges to the new state legislative district lines that will be redrawn in 2021, these races could have a major impact on potential leadership shifts in Ohio.

OAFP members who participate in the forum will be able to submit written questions to the candidates via a chat function or prior to the forum by email. Mr. Paragas will pose questions to the candidates from those submitted. And, even if you aren’t able to join the forum live on Wednesday, September 23, from 1:30 to 3:00 p.m., you can inform your vote by listening to the recording of the forum after the fact. A link will be publicized immediately following the live forum.

The OAFP is proud to host and provide this important opportunity for OAFP members to hear from the Ohio Supreme Court candidates. We hope that you are able to participate.