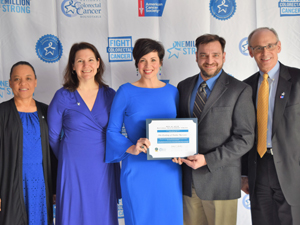 From cobalt blue dresses to live musical performances, the 80% by 2018 award ceremony at Smashbox Studios in Culver City, CA, recognized Ohio as a national leader for increasing colorectal cancer screenings.

It was great opportunity for the Ohio Academy of Family Physicians to be recognized for all the hard work being done to improve processes to increase colorectal cancer screenings, while also acknowledging the partnerships that have paved the way to achieve these successful outcomes.

The event was hosted by the National Colorectal Cancer Roundtable (NCCRT), a national coalition established by the American Cancer Society (ACS) and the Centers for Disease Control and Prevention (CDC).

It was a well-attended event allowing survivors and advocates to share their personal stories while also bringing awareness to the disease that kills more than 50,000 people each year. Mahler was interviewed live on Facebook, and mentioned the important role family physicians play when recommending patients for screening.

Just last year, the OAFP had 75% of its practice teams achieve or exceed the 80% goal. Since 2008, there have been nearly 100 practice teams participate in the colorectal cancer screening program, with more than half of them exceeding or achieving the 80% goal.

Ohio was well-represented at this event. Darrell Gray, MD, MPH, from The Ohio State University Comprehensive Cancer Center, also received an award for his efforts in promoting colorectal cancer screenings in Central Ohio through the James Provider and Community Engagement (PACE) Program for Health Equity in Colorectal Cancer Prevention.

There were many stories that were shared throughout the 80% by 2018 event, but one that stood out in particular was told by Teri Griege, a colorectal cancer survivor. She was diagnosed with colorectal cancer at age 48, and upon diagnosis, one of her two older sisters decided to get screened and was also diagnosed with it as well. In that moment, Griege knew right away that she no longer was going to keep quiet about this preventable disease.

“Don’t die of embarrassment,” she said. “My main message is all around hope. The more we tell our stories, the more others will tell their stories, and the bigger community we can form, and the more powerful we will be.”

Nearly a third of adults between the ages of 50-75 are not getting screened as recommended (representing 23 million people across the United States), and this event highlighted the importance of sharing the message and how this disease affects thousands of people, but can be easily be prevented through screening and early detection.