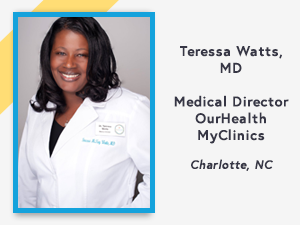 I joined OurHealth in December 2015 and three years later, I’m still passionate about it. I’ll be honest with you – when I first heard about the company, I wasn’t looking for a job. But after first hearing about OurHealth coming to Charlotte, NC, in the local news – and the fact that it was healthcare focused on wellness and preventative care, I thought it sounded interesting and could get me back to what I have a passion for, which has always been my patients and improving their health.

Prior to that, I taught residents for about 10 years and then went into hospital-based practice. Later, the hospital system I was with asked me to open a practice that was intended to be a satellite office of an existing practice. It grew to become very large and very busy. I was working from 6:30 a.m. – 5:00 p.m., and then working again in the evening after coming home. Those weren’t my official hours, but I was starting at 6:30 a.m. every day because I literally never had available appointments. Ninety days out on the schedule, there would be zero available appointments. New patients, established patients – it didn’t matter.

To be able see to my established patients – some of whom had followed me since I was a resident in 1993 – I had to tell them to come in early before the office officially opened.

A Noticeable Difference
When I first met with Jeff Wells, MD, OurHealth co-founder and president, I was invited to Indianapolis, IN, to visit a clinic. When I first walked in, I noticed there was nobody in the waiting room – they later told me that was intentional because wait times are designed to be no more than five minutes. I had been used to walking in the waiting room and seeing literally 50 people waiting to receive care. Another noticeable difference was that the staff and the providers seemed to be engaged and happy.

As the visit continued, I was amazed at the amount of time that the provider had to spend with their patients. The OurHealth care philosophy was very patient centered, which for me was the most important thing. I also met a couple of patients who were very pleased with the clinic and the service.

After the visit, I recalled sitting on the tarmac on the flight back to Charlotte and thinking, ‘I really like this. The people seem happy. The patients seem happy. It seems real – not a fairy tale. This is something I want to be a part of.’

Renewed Energy
My time here has been challenging, but exciting. I joined OurHealth just prior to its network opening in Charlotte, with five MyClinic locations opening almost simultaneously. For a few months, I was living, sleeping, and breathing OurHealth every day. I focused a lot of my time around learning how to integrate new tools like health coaching and a wellness platform into the workflow of how I practice. It’s kind of hard to explain, but it really felt like I had this newfound vitality injected into me – it was a renewed sense of energy and excitement.

Looking back, one of the things I really value about being at OurHealth now is the ability to connect to the company’s leadership, but still have a lot of autonomy. I feel like I can influence how care is delivered. It’s not a micromanaging type of organization. You don’t have to go through 20 people to be heard when you have a concern or a suggestion. That’s valuable because not only is your input heard, but real changes get made. They’re actively listening to you and responding. I love the fact that I can pick up the phone and call Jeff and tell him when I have an issue. And I feel like all our physicians can do that, too.

Teressa Watts, MD, serves as a family physician and regional medical director for OurHealth’s Charlotte network of near-site MyClinic locations, providing care for employees, spouses, and dependents from local employers such as City of Charlotte, Mecklenburg County, and Belk department stores. To learn about OurHealth’s new MyClinic network in Cincinnati and career opportunities for physicians, advanced providers and other healthcare professionals, visit the OurHealth website.