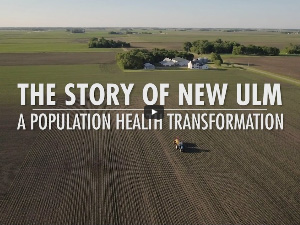 For a quick shot of inspiration in health care, you are encouraged to watch a documentary demonstrating a bellwether example of population health done right. In year eight of a 10-year, 10 million-dollar journey, the community of New Ulm, nestled in Southwestern Minnesota, is proving that the Triple Aim is achievable. There are important lessons to be learned, namely the importance of the long view to making population change, the importance of a data and analytics infrastructure to find improvement opportunities, and visionary leadership to organize process and people around transformational change.

Because the New Ulm Medical Center is part of Allina Health, they had great access to data, but data alone was insufficient to create change. The combined efforts of a variety of government, community, and health care leaders was critical to turn data into real results. While New Ulm is known for beer, bratwursts, and butter, they are now also known for their audacious goal of eliminating heart disease and while not there yet, they have made material improvements to cut heart disease rates, lower cholesterol, reduce high blood pressure, and stabilize obesity while also driving positive improvements in regular screenings, exercise, and nutrition.

The Ohio Academy of Family Physicians’ new strategic plan includes a goal to pursue opportunities where family physicians can improve population health. Over the next four years, the OAFP will be working to better understand the role of social determinants of health and ways that family physicians can impact the policies that affect them. Additionally, the OAFP pledges to help its members better understand their role in improving population health within their own communities.