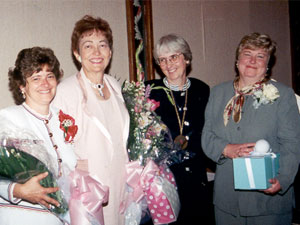 To help commemorate the 70th anniversary of the Ohio Academy of Family Physicians, founded in 1948, we have launched the “Cheers to 70 Years” campaign.

We are excited to share our ninth story of the year with you written by Sally Abbott, MD, FAAFP, of Springfield, OH.

During my 50 years of practicing family medicine, I have received many sincere thank you letters and encounters for saving lives or inspiring patients to make life changes. Just a few weeks ago, I received a thank you note from a patient, Davis, whom I saved from death 30 years ago as a victim of AIDS. My practice was the only one that would take AIDS patients, as my colleagues warned me that taking an AIDS patient would cause other patients to leave the practice.

Instead, I was rewarded by a thank you note 30 years later. Thanks to zidovudine (also known as AZT), hospital admissions, and being a cooperative patient, he has now become a person with a chronic illness and is not condemned to death from AIDS.

A few years later, another encounter occurred when a young woman, we will call her Debbie, asked me to stay after a religious service to talk to me. Debbie, with her young daughter, thanked me for saving her mother’s life when Debbie was just a child. She said that her mother confessed on her deathbed that she was going to commit suicide many years ago, but changed her mind after a visit with me where I was able to talk her out of it.

I was thankful I had the opportunity to help Debbie’s mother and that she was able to live another 30 more years to see Debbie grow up and have a child herself. Debbie and her mother had seen my picture on a wall at a hospital where I was member of the hospital staff. This inspired Debbie’s mother to tell her what happened all those years ago, which prompted her to seek me out so she could thank me.

These are the only two examples of entering into a person’s reality that a family physician, such as I, has experienced. As a family physician, you can enter another person’s life and become almost like a member of their family. Almost every day a former patient comes up to me and thanks me for what I have done in their lives; I am only doing my job.

To all my peers, family medicine residents, and medical students, just remember that you too can make a difference!

Share Your Family Medicine Story!
If you’d like to share your story, please email it to Communications Manager Morgan Pelt as a Word document along with at least 2 photos.