I Had No Idea How I Would Pay for Medical School 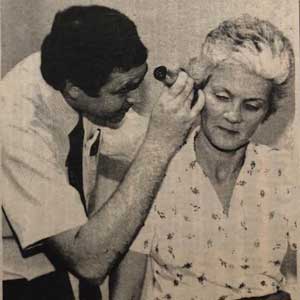 I was a senior at Wittenberg in January 1975 and it was cold. I had been accepted to medical school but had no idea how I was going to pay for it. I was engaged to a girl from Roseville, OH, a small, rural pottery community in southeast Ohio, where everyone knows everyone else, their families, their kids, and their business. They also knew that the village’s only physician, Dr. Nebinger, was going to retire soon after nearly 40 years of practice. And, everyone seemed to be aware that one of their own, Marcie, was engaged to a man who was going to attend medical school.

Subsequently, I was invited to a town meeting held in the American Legion hall, which also served as the local public meeting place for important events. At the time, I was not exactly clear on the purpose of this meeting; however, I entered the hall with Marcie and her parents to find it full of several hundred townsfolk and a podium on a small stage. Seated on the stage were the local grocery store proprietor, the mayor, one of the local ministers, and two village council members. There was also one empty chair – reserved for me. I took my seat, but I was not there long. Some introductions were made, the crowd in attendance was briefly addressed, and I was asked to the podium. Obliging the request, I found myself in front of a crowd of people whom I did not know, who began bombarding me questions. “Where are you from?” “How did you meet Marcie?” “What kind of doctor do you want to be?” “Tell us about your family.” On and on it went. It seemed like hours, but was more likely less than an hour. Then, a man I would soon know as Ted, the owner of the local hardwood mill, stood in the center of the room and said, “Well, I’ve heard enough! Besides, if he is good enough for Marcie, he’s good enough for us!” 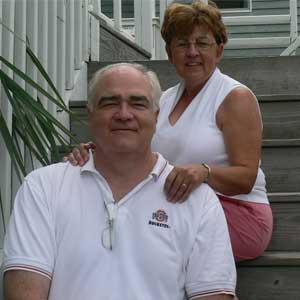 That night, this village of less than 2,000 people offered to pay my medical school expenses, in full, if I only agreed to come back to Roseville and be a family doctor for five years. If I chose to pursue a career other than family medicine, all I had to do was to pay them back. I told them that it would be seven years of medical school and residency before I would be back. Did they really want to make that commitment? There was no hesitancy in their response–YES. Right then and there, via a handshake, “Operation Doctor” was born.

Over the next four years, Operation Doctor was funded by all sorts of fund-raising activities, including multiple community day fairs, garage sales, bake sales, and raffles. You name it, they did it. A 12-foot thermometer was erected at the town square and progress was noted by the rising red “temperature” that measured the dollars raised.

I graduated from The Bowman Gray School of Medicine (now known as The Wake Forest School of Medicine) in 1979 having never seen a bill. The next three years, I was completed my residency in the Akron City Hospital Family Practice Residency program. During my residency, I visited many family medicine offices in Akron to learn what worked and did not work in medical office design. From those, I designed my office, and the nearby Bethesda Hospital in Zanesville, OH, helped with the architectural rendering and construction. Finally, on July 26, 1982, I opened my doors to begin seeing patients. However, unofficially, I became the town doctor weeks earlier, as I had already seen a number of patients who had wandered in with medical urgencies – lacerations, insect bites, etc. 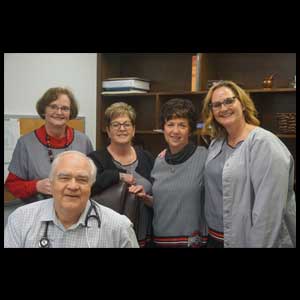 And so it began. A dream had come true. In 1987, the town leaders presented me with a plaque commemorating the completion of my five year obligation of service, a deal that was consummated with a handshake. I proudly hung that plaque in my office for the rest of my career. Over my 36 years in practice in Roseville, my staff (all but one of which remained the same over those 36 years) and I developed our old-fashioned family practice. We did walk-ins, because illness did not adhere to a schedule. Although we did not advertise it, we did house-calls, because some of our lifelong patients were too frail to come to us. I had a large hospital practice, because that time of vulnerability is when my patients needed me the most. We saw ill siblings that accompanied mom and the scheduled sick child because they were just as ill. We went home when the work was done. I came to know these patients, these people, as the best friends in my life. We shared everything with each other. We shared the stories and lives of our families. We watched each other’s kids grow up. We laughed together. We cried together. And, I did my best to navigate these incredible people through the sometimes rough waters of good and bad health.

In 2018, I retired from this practice, leaving it in the capable hands of a competent and personable young physician. Marcie and I still live in Roseville. Everywhere I go, I have the good fortune to see my patients – my friends. We visit, we catch up, and I refer their current medical questions to their new doctor. It has been said, “If you love what you do for a living, you will never work a day in your life.” I am proof of that. Thank God I am a family physician!

If you’d like to share your story, please email it to Director of Membership Emily Pavoni as a Word document along with at least 2 photos.